Chalk cliffs are wax-white and gull-white…

Matthew Clegg‘s poem ‘Chalk’, a recasting of Anglo-Saxon alliterative verse in sonnet form, is one of five poems currently featured in The Journal of Wild Culture‘s maritime selection Gazing In And Out To Sea. Click here to read the poems. ‘Chalk’, which looks out at, from and beyond the chalk stacks of Flamborough, appears in Clegg’s forthcoming collection The Navigators (due from Longbarrow Press in May 2015). Clegg’s debut collection West North East is still available from Longbarrow Press, as is his limited edition pamphlet Officer; click here to read an extract from the pamphlet (and to order copies). 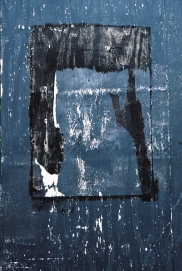 ‘Night itself becomes a place, a temporary theatre…’ The life and works of Sheffield sculptor George Fullard are remembered in ‘Haunts’, a short essay in which Brian Lewis traces the ‘internal displacement’ of three bronze statues in Andrew Hirst‘s sequence ‘Three Night Walks’ (featured in the Longbarrow Press anthology The Footing). You can read the essay here. ‘I lost someone recently. He wasn’t a love or a relative, or even a friend. He wasn’t mine to lose at all…’ In another new essay, Angelina Ayers
pursues and develops a different reading of displacement by way of DH Lawrence, Kraftwerk and The Eagles. Click here to read ‘Hotel California’ on the Longbarrow Blog. Our third essay of 2015 is the first in a three-part series by Karl Hurst focusing on the ‘liminal spaces’ opened up by his photographic practice. ‘Reflections on Impracticality’ examines ideas of home, identity, and, in particular, the ‘temporary shelters’ found in certain Northern English landscapes (which lend their name to his current photo-series ‘Booths’). You can read the essay here.

Mark Goodwin and Brian Lewis reflect on the editing and shaping of Goodwin’s recent collection Steps in a candid and wide-ranging discussion with Elaine Aldred (on her Strange Alliances blog); click here to read ‘Steps of Creation’. Mark also recounts the development of his work as a sound artist in a further interview with Elaine (with contributions from producer Steve Gibbs); click here to read the interview.