Mark Goodwin‘s new collection Steps (launched at The Fat Cat, Sheffield, earlier in December with readings from Goodwin and Angelina Ayers) is featured in this month’s Journal of Wild Culture, with the text and audio versions of the poem ‘Forced Moment at El Torcal, Andalucía’ framed by images of the karst landscape in which it is set. Click here to read and listen to the poem. Peter Boughton’s review of Steps for Minor Literature[s] considers the ‘tightrope’ on which the poems are balanced, ‘poems as much concerned with phenomenology, the movement of the mind, as any physical journeying’. You can read the review here. The development of Steps is recounted in a new Longbarrow Press audio interview, which also finds Goodwin revisiting the landscapes (and soundscapes) mapped in the book (and its accompanying CD). Listen to the podcast below:


We’ve also created a short film trailer to mark the publication of Steps:

Steps was one of many highlights in a very active, wide-ranging year for Longbarrow Press. Here’s a summary of the events, projects and publications that made 2014:

#1  March.  Fay Musselwhite leads Contra Flow, a walk through Sheffield’s Rivelin Valley, reading poems from The Footing with new work that deepens her engagement with this territory. Her account of the journey through the valley, shaped by the ‘ancient shifts, flows and drops’ of its eponymous river, appears here.
#2  April.  Poems, Places & Soundscapes, an exhibition of digitally produced sound-&-poetry, is installed in Leicester’s Cube Gallery. Mark Goodwin and Brian Lewis present a range of vivid, immersive sound-enhanced poetry and a selection of ‘place-entranced’ film-poems. Click here for more information about the exhibition.
#3  May.  Matthew Clegg returns to the East Leeds suburb of Crossgates for the third and final West North East audio podcast. Clegg’s unique perspective on the area’s ‘arrivals and departures’ frames his readings of three poems that reference its fields, estates and factories. Listen to the podcast below:

#6  July.  Two new posts on the Longbarrow Blog focus on the making (and remaking) of poetry anthologies. In ‘The pace of The Footing‘, Brian Lewis discusses the roles of craft and collaboration throughout the five-year development of the book. Chris Jones considers the fate of ‘landmark’ poetry anthologies in ‘The New, New, New Poetry: A Consumer’s Guide’; click here to read his survey of the changing ‘state of play’ in the UK poetry landscape.

#7  August.  Longbarrow Press publishes The Ascent of Kinder Scout, Peter Riley’s pamphlet-length meditation on (and elegy for) this physical and cultural landmark of the Peak District. The front and back covers feature two remarkable paintings of Kinder Downfall by Paul Evans. Voted Best Poetry Pamphlet of 2014 by the London Review Bookshop. 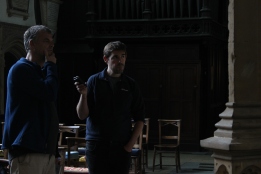 #8  September.  Poet Chris Jones, artist/writer Emma Bolland and editor/publisher Brian Lewis visit three churches in Nottinghamshire and Lincolnshire to record three podcasts based on Chris’s Reformation-era sequence ‘Death and the Gallant’ (featured in The Footing). Each of the podcasts is accompanied by a short essay on the Longbarrow Blog (‘The Dance of Death‘, ‘The Last Judgement‘, ‘The Shepherds of Corby Glen‘ ); the essays are illustrated with Emma Bolland’s photographs from the church visits.
#9  October.  Longbarrow Press returns to The Shakespeare, Sheffield, for The Shattered Stars, an event focused around two poetry sequences by Chris Jones, with projected visuals by Paul Evans, sound design by Brian Lewis, and live music from Emma Bolland.

#10  November.  Mark Goodwin‘s long-awaited collection Steps appears in hardback, the culmination of several years’ writing and journeying by the poet and several months’ creative collaboration with the editor. Steps is launched at The Fat Cat, Sheffield, with readings from Goodwin and Angelina Ayers, each of which explores ideas of commitment, exposure and risk.

We end the year with two winter journeys: Fay Musselwhite‘s ‘Impasse’, a vision of a ‘hoar-coated’ Rivelin Valley that first appeared in The Footing and which we now revisit as our current Featured Poem; and Matthew Clegg‘s ‘The Last Workday Before Christmas’ (from West North East), in which temporal and emotional distances expand and collapse in the commute from city to suburb.

Our sincere thanks to everyone who has supported the press over the last 12 months; we return in 2015 with a new series of projects, publications and events, including new hardback collections by Matthew Clegg and Chris Jones and a new audio commission for Leeds Art Gallery. Further details will be posted in the new year.