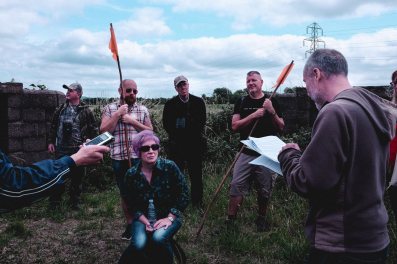 ‘Old space, new space. In a site like this, the changes of use and of appearance aren’t always apparent: there’s little here to suggest that this was, until recently, a ‘working landscape’, the grassland and wetland concealing the scars of industry.’  In July 2017, Matthew Clegg and Brian Lewis led a walk through Adwick Washlands, a recent addition to the RSPB’s landscape portfolio, nestled in a shallow pocket of the Dearne Valley. A new essay for the Longbarrow Blog considers the physical (and historical) porosity of the site, its ‘movable frontiers of land and water’ and ‘soft borders’ with estates and farmland, and the walk itself, animated by skylarks and wodwos, ‘the whiff of ferality’, and the discovery of a swallow’s nest in the concrete chamber of an anti-aircraft gun site. Click here to read ‘Open to the Sky’ by Brian Lewis.  ‘And further on, and where this hidden glen t-junctions, and where burns merge, and where little pylons carrying power-lines pass, their frames’ movements through this place defined by their actually staying still within it … here, at this juncture, there are some ruins. The larger house has been sky-opened, and young rowans grow on the battlements of its crumbling.’ Elsewhere on the Longbarrow Blog, Mark Goodwin recounts a journey through the glens and lochs of Western Scotland in the wake of ‘days of snow and ice’, soundtracked by ‘some unidentified bird’, as the year’s first flush of light and heat is felt, and spring unfurls ‘its newest of oldest gestures’. You can read ‘Matter’ here.

‘There’s anger in this collection, and rightly so, but it’s harnessed and restrained into these meticulously constructed and beautiful poems.’
Kelvin Corcoran‘s new Longbarrow Press pamphlet was reviewed in The New European in February, and acclaimed by Charlie Connelly as ‘the best articulation of the post-Brexit shock and fallout’. Article 50 is also the subject of a piece by Ian Brinton for the Tears in the Fence blog, which concludes that ‘this beautifully produced little book should be read by anyone who values lyric poetry… [it] requires us to take account of what is truly meant by loss, both personal and social.’ Click here to read the review. On the website of the international journal BODY, David Wheatley considers Alistair Noon‘s recent Longbarrow pamphlet QUAD: ‘an elegant little meditation on the finitude of knowledge and form, and on what lies beyond them. It is also a poem that confirms Noon as one of the most interesting of the poets footloose in the modern European Anglosphere’. Click here to read more.

‘Trees are like gold, but gold / is like dust.’  One of several new poems to appear from Angelina D’Roza since the publication of her debut collection Envies the Birds, ‘Trees’ is currently featured on the Honest Ulsterman site: click here to read the poem.

You can find us at several events throughout Yorkshire in April and May, including The Old Weird Albion with Justin Hopper, Sharron Kraus and Longbarrow poet Chris Jones (Sheffield, 20 April); Print Stuff, a new print and publishing fair (York, 28 April); and The Motley Muse, a one-day symposium with talks and readings from Vahni Capildeo, Kelvin Corcoran, Brian Lewis, Sandeep Parmar, Peter Riley, and more (Huddersfield, 19 May). Visit our Events page for further details.