Longbarrow Press rounds off its twelfth year of activity with a review of the events, projects and publications of 2017:

Both come first:
the light and the lights,
reports from our birds
and the waking flights.

#1  January / May.  The year’s first post on the Longbarrow Blog marks a welcome return for poet and translator
Alistair Noon, who offers a brief, selective history of short forms in English, and an introduction to the poetry of Philip Rowland, in ‘Small is Beautiful’. The essay is followed a few months later by the publication of Noon’s QUAD, a cycle of 64 four-line poems presented as a square pamphlet, hand-stitched and hand-stamped.

#2  February.  We revisit Fay Musselwhite‘s encounters with the fast-flowing waters of the Rivelin Valley, north-west Sheffield; the setting of many of the poems in her debut collection, Contraflow, and the focus of a series of public walks led by Musselwhite in recent years. Click here to listen to an edited recording of the first walk (from March 2014); you can watch a short film of the third walk (with Karl Hurst) below. 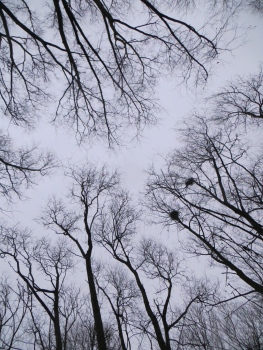 #3  February – September.  Mark Goodwin‘s postcard from the ‘nation-less’ state of Jackdawia is the first of several posts by him, loosely organised around themes of flight and sound, to appear on the Longbarrow Blog in 2017. February’s ‘An Alphabets’-Lattice’ is followed in May by the short prose poem ‘Age of Sh All’; the swallow’s return to the outbuildings of a Leicestershire farm is celebrated in July’s ‘Flight of Being’. Goodwin’s final post, which reflects on a collective exploration of a disused quarry in Charnwood, is also (like ‘Age of Shall’) an introduction to a short film set in a ‘forbidden fenced elsewhere’: you can read ‘A Corner and a Carried Line’ (and watch the short film) here.

#4  February – April.  In ‘Don’t think it couldn’t be you’, Matthew Clegg pursues the theme of homelessness, from the streets of present-day Derby to the pages of Peter Reading’s 1989 collection Perduta Gente, in which the accounts of dereliction and dispossession are heightened by Reading’s juxtaposition of ‘found material’ with a ‘brutal and brutalised’ vernacular. Click here to read the essay. Clegg draws on poems in the first section of his collection The Navigators for a new podcast with a ‘fireside’ ambience, in which he reflects on intimacy, hospitality and romantic love, and the landscapes, creatures and people of Grasmere. Listen to ‘Trig Points: The Hearth’:

#5  March – April.  Two posts on the Longbarrow Blog enquire into the relationship between technology and memory. The first, by Angelina D’Roza, gathers several forms – poem, prose, letter – into its folds, as it tracks the human voice across distances and silences, expanding and collapsing, the dream of ‘what you wanted to say heard and understood, as you meant it to be heard and understood.’ Click here to read ‘About the Human Voice’. The second post takes up the theme of England’s industrial legacies, with reference to the poetry of Matthew Clegg, Fay Musselwhite and Karl Hurst; a disappearing ‘post-work’ terrain ‘caught between renunciation, remembering, and renewal.’ Click here to read ‘Ground Work’ by Brian Lewis. 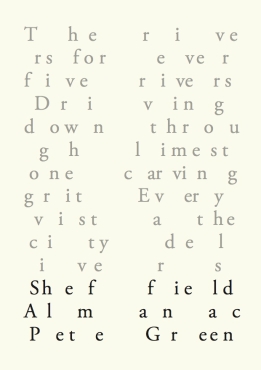 #6  May.  Pete Green‘s Sheffield Almanac
makes its debut in print, accompanied by a series of readings, talks and performances around the city. Described by Green as a pamphlet-length ‘poem in four chapters about rivers, rain,
relocation, and regeneration, exploring the industrial past and post-industrial future of my adopted home city,’ its thesis and themes are developed in a short piece on the poet’s website, and in ‘Model City’, a searching, critical essay for the Longbarrow Blog, in which Green addresses issues of civic identity and civic pride, and examines the processes through which Sheffield’s people and products can become subject to an inadvertent fetishisation, even as we affirm the city’s resourcefulness and individuality.

#7  May – June.  Angelina D’Roza and Pete Green lead ‘Vanishing Point’, a city walk that unstitches central Sheffield’s ‘invisible threads’ and intersecting lines of road, river and rail, scaling and exploring its iconic and historic sites, before reaching the Cholera Monument, a hilltop terminus with near-panoramic views of Sheffield, and the site of D’Roza and Green’s closing readings.

The experience is recalled in ‘Parallel Lines’, an essay by Brian Lewis (illustrated with photographs from the walk) that also touches on the ethos and development of Longbarrow’s poetry walks since 2008, in which the audience become ‘participants and contributors, crafting an experience through a collective act of heightened attention.’

#8  July.  To mark National Meadows Day (and the close of the 2017 Ted Hughes Poetry Festival), Brian Lewis and Matthew Clegg lead a walk through Adwick Washland, an ‘open’ RSPB site just north of Mexborough. Clegg and Lewis draw on their own and others’ work as they move through this compact but diverse wetland, their readings framed by a discussion of the history and ecology of this unique feature of the Dearne Valley. Click here to view photographs from the walk.

#9  October.  ‘The glass in the frame is both window and mirror.’ In an extended essay for the Longbarrow Blog, Brian Lewis surveys the poetry of Nancy Gaffield (by way of Eratosthenes, Solnit, Muybridge and Hiroshige), the ‘vigour and surprise’ of which ‘is traceable to an ongoing negotiation between the grid and the ground, the ‘mental map’ and ‘physical topography’, the abstract and the particular, the past and the future.’ Click here to read ‘Mirror Image’.

#10  January –November. Over the course of the year, four candid, ruminative essays by Chris Jones examine the creative process, and the language that variously obscures or reveals its workings. In the first of these, Jones deconstructs the ‘scaffolding’ of the poem and reflects on the ‘accidents’ of its architecture, exposing the half-forgotten sketches rarely seen outside of ‘the private areas, where we cultivate our own tastes, work through our obsessions, where we experiment, make ‘mistakes’…’ Click here to read ‘The Rooms of the House’. ‘The Lure’ reframes this discussion of craft to bring collaborative projects into focus, while also addressing the tendency of many poets to avoid critical reflection and self-examination when considering their own work, finding that ‘one of the ironies of writers reflecting on their own practices is how limited the analysis of craft is, of finding words to externalise this inward-looking game.’ In the third piece, Jones reflects on the ‘tricks‘ of composition, dismantling the cult (or convention) of ‘stagecraft’ and ‘sorcery’, choosing, instead, to ‘take the trick apart, studying its mechanisms, its weight and shine, from multiple angles.’ You can read ‘The Trick’ here. The final essay, ‘Wheest, Wheest’, listens into the ‘conversations’ within and between the poems of Thom Gunn, Michael Longley and WS Graham, and, through close, considered readings of their work, invites us to think of the poem as ‘as a skeleton key that can open a secret compartment in the other text’s structure, revealing a whole new layer of meaning.’


Our thanks to everyone who has supported the press over the last 12 months; we return in 2018 with a new series of projects, publications and events, including titles by Kelvin Corcoran and Mark Goodwin. Further details will be posted in the new year.