31 January
Elaine Aldred’s extended interview with Matthew Clegg (published on her Strange Alliances blog) explores the idea of place as predicament, the relationship between poetic idiom and integrity, and the crafting of the sequences in Clegg’s West North East (Longbarrow Press). Click here to read the full interview. Photo by Paul Evans. 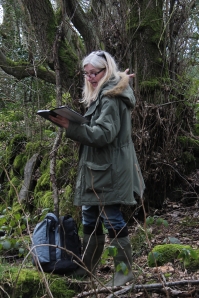 1 March
Poet Fay Musselwhite leads a walk through Sheffield’s Rivelin Valley, reading poems from The Footing alongside new and unpublished work that deepens her engagement with this territory. Musselwhite’s commentaries were supported by a wealth of observational detail from conservationist Graeme Hodgson and contributions from the audience of 20. Her account of the journey through the valley, a landscape shaped by the ‘ancient shifts, flows and drops’ of its eponymous river, appears here (including previously unseen photos from the river walk, and recordings of each of the featured poems). Click here to view Emma Bolland’s photos from the river walk.

April
Poems, Places & Soundscapes, an international exhibition of digitally produced sound-&-poetry focusing on place and soundscape, is installed in Leicester’s Cube Gallery for three weeks. Mark Goodwin and Brian Lewis present a range of vivid, immersive sound-enhanced poetry made through various poet, musician and sound-designer collaborations, as well as by individual poet-sound-artists, and a selection of ‘place-entranced’ film-poems. Click here for more information about the exhibition. Photo by Nikki Clayton.

Artist Paul Evans and poet Helen Mort visit Stanage, the ‘stone edge’ that marks the border of Derbyshire and Sheffield, for the seventh work in the second phase of The Seven Wonders. Their collaborative response to this gritstone escarpment is a poem that references one of the climbing routes on the steep buttress, and a painting that evokes the uncommon ground reached at the end of the climb. Click here to view the poem and the painting.

May
Matthew Clegg returns to the East Leeds suburb of Crossgates for the third and final
West North East audio podcast. Clegg’s unique perspective on the area’s ‘arrivals and departures’ frames his readings of three poems that reference its fields, estates and factories, and that also mark the passages of age. Listen to the podcast below, and watch the accompanying short film:

Longbarrow Press devises two special performances as part of the month-long Midsummer Poetry Festival at
Sheffield’s Bank Street Arts. The first of these, Matthew Clegg’s Chinese Lanterns, is a ritualised arrangement of poems from his collection West North East, aided and abetted by poet Andrew Hirst. It is followed by Pilgrimage: a walk through The Footing, in which Angelina Ayers, James Caruth, Mark Goodwin, Rob Hindle, Andrew Hirst, Chris Jones and Fay Musselwhite mark a new route through our walking-themed anthology, with an emphasis on memory and memorial. Click here to listen to recordings from Pilgrimage. A short film of Clegg and Hirst’s Chinese Lanterns performance appears below:

July
Two new posts on the Longbarrow Blog reflect on the making (and remaking) of poetry anthologies. In ‘The pace of The Footing‘, Brian Lewis reflects on the five-year development of the first Longbarrow Press anthology, and the central roles of craft and collaboration in determining the routes toward (and beyond) the book. Chris Jones considers the fate of ‘landmark’ poetry anthologies in ‘The New, New, New Poetry: A Consumer’s Guide’, revisiting anthology introductions and commentaries drawn from the last 50 years; click here to read his survey of the changing ‘state of play’ in the UK poetry landscape. Further blog posts by Matthew Clegg (‘Meeting and Melting: On Discovering Derek Walcott’) and Mark Goodwin (‘Key Ping Ba(p)la(n)ce’) offer contrasting reflections on the desire for both ‘here’ and ‘elsewhere’, in literature and in the landscape. Photo by Nikki Clayton.

8 August
Longbarrow Press publishes The Ascent of Kinder Scout, Peter Riley’s pamphlet-length meditation on (and elegy for) this physical and cultural landmark of the Peak District. The front and back covers feature two remarkable paintings of Kinder Downfall by Paul Evans. Two extracts from the work appear here. 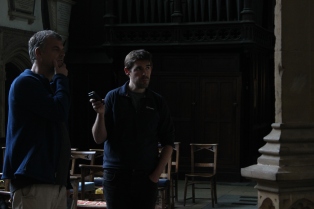 19 September
Poet Chris Jones, artist/writer Emma Bolland and editor/publisher Brian Lewis visit three churches in Nottinghamshire and Lincolnshire to record three podcasts based on Chris’s Reformation-era sequence Death and the Gallant (featured in The Footing). Each of the podcasts is accompanied by a short essay on the Longbarrow Blog; the essays are, in turn, illustrated with Emma Bolland’s photographs from each of the church visits. Click on the following links to read the essays and listen to the podcasts: ‘The Dance of Death‘ (Brian Lewis on St. Mary Magdalene church, Newark-on-Trent); ‘The Last Judgement‘ (Emma Bolland on St Andrew’s, Pickworth, Lincolnshire); ‘The Shepherds of Corby Glen‘  (Chris Jones on St John the Evangelist’s Church, Corby Glen, Lincolnshire). 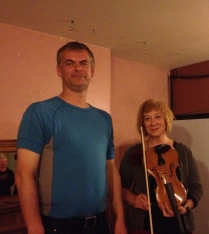 19 October
Longbarrow Press returns to The Shakespeare, Sheffield, for The Shattered Stars, an event focused around two poetry sequences by Chris Jones. The first half is a presentation and reading of Death and the Gallant, with projected visuals by Paul Evans and sound design by Brian Lewis. A new arrangement of Jigs and Reels makes its debut in the second half, with Jones’ sprung rhythms accompanied by live music from Emma Bolland (on violin).

November
Mark Goodwin‘s long-awaited collection Steps appears in hardback, the culmination of several years’ writing and journeying by the poet and several months’ creative collaboration with the editor. Steps is launched at The Fat Cat, Sheffield, in December, with readings from Goodwin and Angelina Ayers, each of which explores ideas of commitment, exposure and risk. Mark discusses the development of Steps (interspersed with excerpts from the limited edition CD steps / sounds) in an audio interview with Brian Lewis: