Longbarrow Press rounds off its tenth year of activity with a review of the events, projects and publications of 2016: 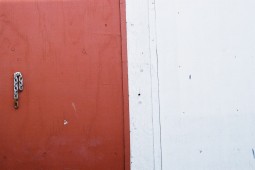 #1  January – February.  On the Longbarrow Blog, three new posts by Brian Lewis explore ideas of settlement, public space and collective memory. ‘The House of Numbers’ reflects on the East London district of Silvertown, social dispersion and the poetry of Ken Smith; Rob Hindle’s Hillsborough (the focus of a sonnet sequence in the Longbarrow anthology The Footing) is re-walked in ‘Dead Ends’; and ‘Self-build’ considers the post-war overspill towns, model villages, prefabs and self-build schemes of south-west England. 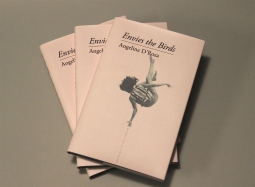 #2  March.  Angelina D’Roza  previews her debut collection, Envies the Birds, with an essay that introduces some of the book’s themes, including seasonal (and unseasonal) change, hope in the desert, and the transformative potential of song. You can read ‘Late for the Sky’ here. A beautifully produced hardback (with jacket artwork by Beverley Green), Envies the Birds is launched at The Fat Cat, Sheffield, with a joint reading by D’Roza and poet Ruby Robinson; click here for further details of the book. 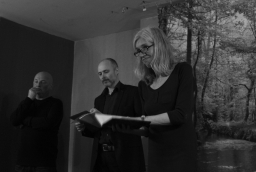 #3  April.  Fay Musselwhite‘s debut collection Contraflow is published by Longbarrow Press, and is launched at The Shakespeare, Sheffield, with a collective performance by Matthew Clegg, Karl Hurst, and Musselwhite (and stage design by Susannah Gent and Mary Musselwhite). Visit the Contraflow microsite for further details of the book. ‘Crafting a poem isn’t taming timber or chipping away at marble: the material is word, the craft is in negotiating between sound and meaning, the only muscle to wield is the mind.’ A related piece by Musselwhite, ‘The Craft Muscle’, distills a lifetime’s learning and creative practice. Click here to read the essay. A further post for the Longbarrow Blog – Karl Hurst‘s ‘In Praise of the Ordinary’ – addresses the former sites of the South Yorkshire coalfields, ‘caught between the sublime and the banal’, in a polemic on cultural value and ‘geopolitical dysmorphia’.

#4  May.  A new podcast focuses on poems from Angelina D’Roza‘s Envies the Birds, recorded at the foot of the Cholera Monument, Sheffield. D’Roza’s readings are interspersed with reflections on the vegetal layering of nearby Clay Wood, and the rapid layering of the city skyline. Listen to the podcast below: 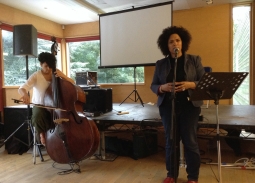 #5  June – July.  In June, poets Matthew Clegg and Mark Goodwin present a collaborative reading in Buxton, accompanied by projected images and field recordings. The reading is the closing event of Digital Re-Enchantment: Place, Writing & Technology, a Manchester Metropolitan University symposium exploring the relationship between virtual maps and the natural world, questions of language and representation, and the role of technology in creative practice. Some of these themes are taken up in ‘Field Systems’, a a new post for the Longbarrow Blog, in which Brian Lewis reflects on his own practices (as editor and publisher, and as a walker and writer) and on the search for community in both digital and physical terrain. In July, Lewis curates a two-day spoken word programme in Hillsborough Park as part of Hillsfest, featuring poetry readings, collaborative performances, music, talks and more. An account of this festival, and the second Ted Hughes Poetry Festival earlier in June, picks up the ideas of common wealth and common heritage at the heart of these shared spaces. Click here to read ‘The Outbuilding’ on the Longbarrow Blog. 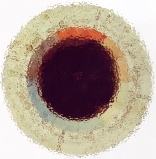 #6  August – September.  Conceived and curated by Paul Evans and Brian Lewis, The Rose of Temperaments is a collaborative project featuring poetry by Angelina D’Roza, A.B. Jackson, Chris Jones, Geraldine Monk, Helen Mort and Alistair Noon. Each poet is allocated one of six primary or secondary colours – Red, Purple, Blue, Green, Yellow and Orange – and creates a poem based on that colour. The project’s outputs include six sonnets (and their ‘recoloured’ variants), a series of recordings, and several prose pieces, including a two-part essay by Brian Lewis: ‘White Point’ (on colour perception, the development of Goethe and Schiller’s original ‘Rose of Temperaments’ colour wheel, and the new project’s origins) and ‘Black Square’ (on field recordings, night walks, the paintings of Kazimir Malevich, and the reworking of the sonnets).

#7  September.  Walker, climber and poet Mark Goodwin considers the development of his ‘rail-balancing’ practice in the parklands of Leicestershire, in which impediments to movement – protective rails and posts, sometimes recycled from transport infrastructure – are reclaimed as ‘ways’ through these managed landscapes. Click here to read ‘Along a Line’ on the Longbarrow Blog. A short film by Goodwin and filmmaker Martyn Blundell documents the poet’s ‘rail-balancing’ in Watermead Park, north of Leicester: 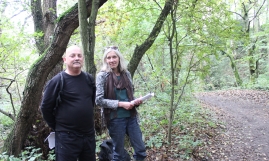 #8  October.  Karl Hurst and Fay Musselwhite lead Contraflow, the third in a series of walks through Sheffield’s Rivelin Valley. Making a three-mile loop of the tree-lined river, the two poets reimagine the story of these working, wheel-geared waters, their cycles of industry and recovery: against and with the flow. A new Longbarrow short film creates a dialogue between Musselwhite’s poem ‘Little Matlock’ (featured in her collection Contraflow) and images by Hurst: 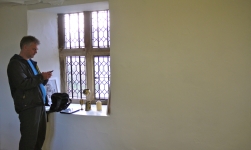 #9  November.  Chris Jones reads and discusses his sequence ‘Death and the Gallant’ in the atmospheric setting of the Turret House at Sheffield Manor Lodge. The following Saturday, Longbarrow Press presents a one-day Independent Publishers’ Book Fair at Sheffield’s Bank Street Arts, joined by a handpicked selection of artists and small presses; a showcase of poetry, fiction, art writing, literary criticism, zines, and a welcoming, community-focused event, emphasising the wealth and diversity of the region’s cultural output. 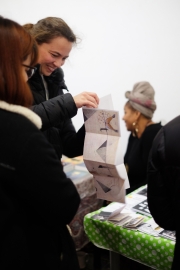 #10  November – December. In the final Longbarrow Blog posts of 2016, Matthew Clegg explores the relationship between his teaching practice and his creative work, and the tension between orthodox methods and objectives and the independent, resourceful spirit of the self-taught practitioner. Click here to read ‘Writing and the Autodidact’. Resourcefulness is also a theme of ‘The Marketplace’, Brian Lewis‘s survey of a year of collaborative work and freelance projects, in which he considers the origins of the marketplace, its history as a site of resistance and exchange, and the possibility of validation through reciprocity. Click here to read the essay.

Our thanks to everyone who has supported the press over the last 12 months; we return in 2017 with a new series of projects, publications and events, including pamphlets by Pete Green and Alistair Noon. Further details will be posted in the new year.