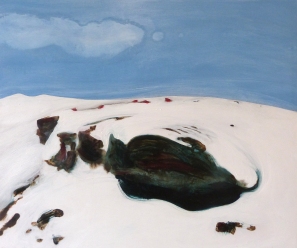 The seventh work in the current phase of The Seven Wonders focuses on the ‘stone edge’ that marks the border between Derbyshire and Sheffield: Stanage. Artist Paul Evans and Derbyshire Poet Laureate Helen Mort respond to this gritstone escarpment with a poem that references one of the climbing routes on the steep buttress, and a painting that evokes the uncommon ground encountered at the end of the climb. Click here to view the poem and the painting, and to listen to an edited discussion about the collaboration. 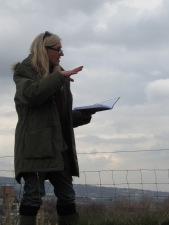 Fay Musselwhite‘s account of her recent journey through the Rivelin Valley, a landscape shaped by the ‘ancient shifts, flows and drops’ of its eponymous river and the more recent traumas of its industrial harness, is one of two new posts on the Longbarrow Blog. Click here to read ‘Contra Flow’ (the essay includes previously unseen photos from our Footing-themed river walk of 1 March 2014, and recordings of each of the poems featured in the walk). ‘I was afraid of the dark, of strong light, of stillness, of anything that moved, of company, of being alone…’ ‘Not Daffodils’, Matthew Clegg‘s taut
memoir of poetry residencies and psychosis (based on two winters in Grasmere at the end of the millennium), is our second new blog post: you can read it here.

Our current Featured Poem is ‘Ball Street Bridge’ by Angelina Ayers (taken from her sequence ‘The Strait’ in our walking-themed anthology The Footing). Click here to read the poem (and to listen to a recording of Ayers reading it on location near Ball Street Bridge, Sheffield). Ayers was one of 10 contributors to our Call & Response haiku project in 2012 (the others were Matthew Clegg, Abigail Flint, Mark Goodwin, Rob Hindle, Chris Jones, Fay Musselwhite, Mary Marken, Andrew Myers and Ruth Palmer). Musician and producer Michael Harding has created a new arrangement of the work, integrating the original haiku recordings with music composed specifically for this project: a setting in which ‘whinchats flit and whirr, / throwing out short jags of song /to tether the air’ (Chris Jones). Listen to the new version of Call & Response below:

The Poems, Places & Soundscapes exhibition of sound-enhanced poetry and film poems (co-curated by Mark Goodwin and Brian Lewis) is at Leicester’s Cube gallery until Sunday 27 April. Elaine Aldred recently interviewed Goodwin and Lewis about the exhibition for her Strange Alliances blog; you can read the interview here. Finally, Sheffield’s Bank Street Arts will host the Midsummer Poetry Festival in June (in association with Sheffield Poetry Festival). The programme will include performances, workshops, a symposium and a book fair. Longbarrow Press will be involved in a number of events, including a presentation of Matthew Clegg’s Chinese Lanterns and an ensemble performance of The Footing (both Saturday 14 June). Further details will be posted to our Events page in the near future; follow the Midsummer Festival account on Twitter for the latest updates.