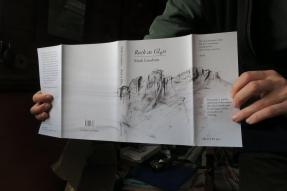 The wind with nothing.
The stone’s directions.

January.  The year opens with the publication and Sheffield launch of Rock as Gloss, Mark Goodwin‘s sixth full-length collection, and his second with Longbarrow Press. Comprising both poems and fictions, Rock as Gloss is a category finalist for the 2019 Banff Mountain Book Competition, and is named as a ‘book of the year’ by Rob Greenwood on the UK Climbing site (‘a collection as varied as the rock within the British Isles’). The book’s themes of movement and stillness are amplified by a digital release of ‘sound-enhanced’ and field recordings, which you can listen to here. 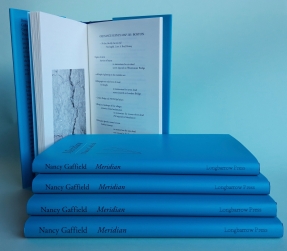 writing along an invisible
line whose end is infinite

February.  Nancy Gaffield‘s book-length poem Meridian is published by Longbarrow Press, and is marked by a launch in Canterbury. Drawing on her walks from Peacehaven (where the Greenwich Meridian crosses the English south coast) to Sand le Mere (where it exits the erosive East Yorkshire cliffs), it is acclaimed by Katrina Naomi as ‘a charged meditation … lyrical, political and nuanced’, and by Billy Mills as ‘a poem that mourns the passing of the world it is travelling through’. 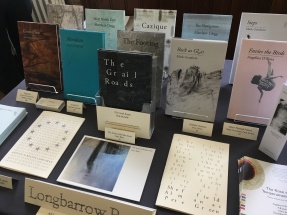 February – October.  Longbarrow Press sets out its stall at a series of independent book fairs around the UK, including festivals in Leeds, Leicester, Manchester and Sheffield. Thanks to the event organisers, and to everyone who visited our stall.

March.  ‘I want the shape of the poem to be determined by the rhythm of walking—the measure of the step to shore up the measure of the line…’ On the Longbarrow Blog, Nancy Gaffield discusses the walking and writing of Meridian in ‘The First Cut’, and considers the origins and sources of the poem. A companion essay, ‘The Last Step’, looks back at the resulting work, the methods of ’embodied research’ that informed its development, and the range of forms (‘the epistolary poem, the acrostic, the prose poem’) that mirror the paths and landscapes of Meridian‘s 270-mile journey.

April. Longbarrow Press takes part in the two-day Modern Nature symposium at The Hepworth (Wakefield). Editor / publisher Brian Lewis opens with a survey of the press’s ‘collaborations’ with urban and rural landscapes over the years; Fay Musselwhite reads and discuss several poems that focus on humans adapting to changes in their environments; and Pete Green considers shifts in affect and scale from the Wordsworthian sublime to the provincial sublime. Other speakers include writer and environmentalist Zakiya Mckenzie (pictured here with Fay Musselwhite, Pete Green, and Brian Lewis) and poet Helen Mort.

And later the clicking of a passing train
along the valley. The skills people have.
The patience they endure.

May.  The publication of Truth, Justice, and the Companionship of Owls, a new collection by Peter Riley (and his first for Longbarrow Press). Appearing less than a year after his two-volume Collected Poems, it is hailed by Billy Mills as ‘a remarkable late flowering for one of England’s most interesting living poets’, and by Linda France as ‘a compelling and persuasive collection’ (in a wide-ranging piece for Poetry Review). Click here to read an extract from Truth, Justice, and the Companionship of Owls.

May.  Nancy Gaffield and Mark Goodwin present a one-off collaborative performance at the inaugural Sheaf Poetry Festival in Sheffield, drawing on their collections Rock as Gloss and Meridian to create a new work that explore themes of movement and mapping.

The festival is brought to a close by Rob Hindle and Fay Musselwhite, who lead a poetry walk spanning Rivelin Dams and Redmires Reservoir, via the recently rediscovered WWI training trenches at Quarry Hill. The walk begins with a glimpse of the river Rivelin (in its infancy), winding upward and westward through the ‘defensive landscapes’ that mark the boundary of western Sheffield and the Peak District.

June.  ‘Clare demonstrates how the sublime might be reconfigured in terms of both scale and location – from the grandiose to the humble, and from the notable to the obscure.’  Pete Green revisits his contribution to the Modern Nature symposium, and widens the terms of its enquiry for a new post on the Longbarrow Blog. Click here to read ‘The provincial sublime: transcendence and the post-industrial’.

September.  The publication of Angelina D’Roza‘s Correspondences, a hand-stitched pamphlet comprising 18 new poems (and her first title since her debut collection Envies the Birds, of which Peter Riley said: ‘There is an urgency of saying in all D’Roza’s work, to speak experience authentically and thereby lead it beyond the subjective, and to bring it to its point, its meaning, which is never reached in an automatic or conventional way.’). Click here to read a sample poem. 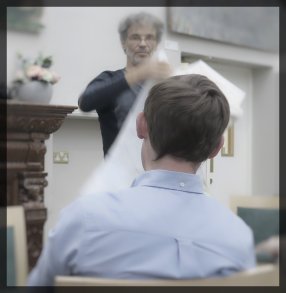 November.  Emma Bolland, Mark Goodwin and Brian Lewis are among the Featured Poets at the fourth Carlisle Poetry Symposium, a one-day event at Tullie House, Carlisle.